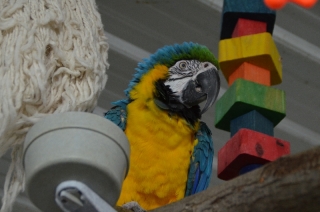 When we tour facilities and gather data, I am able to get a lot of fascinating information from the facility owner that may not make it into the database, simply because of the nature of the data we are collecting. I want to allow readers and fans to follow our experience and get some more personal information about each facility, so we will be conducting short interviews with each facility we visit. I hope this will give you better insight to each facility. Since Iowa Parrot Rescue was our first facility, Mike Hutchinson will also be our first interview.

Emily: Out of the facilities visited so far, Iowa Parrot Rescue strikes me as unique because of your no fee adoptions – can you tell readers more about that?

Mike: We don’t charge a fee because we want adoptive homes that are best for the birds…that usually means being home a lot, and many of the people who have the most time and love to give are disabled, retired, stay-home parents….people who may not have a lot of money, but can give a lot of time to the birds. Doing it this way means we have to raise more donations, but in the end we’ve managed to do what needed to be done.

Emily: What made you start a parrot rescue?

Mike: The rescue was an accident. Someone gave my wife Abi a canary. Someone else saw it and asked me to take their bird. In six months we had nine birds…we had to decide where to go from there. We had adopted several children, and done dog rescue, so it was a natural progression.

Emily: During our talk you mentioned the importance of sustainability and endowments for a facility so that rescues can continue their work even after the founder is no longer involved. Can you tell us more about that?

Mike: Most rescues are one-person operations, and the biggest problem is continuity when the founder can’t run it anymore. After we have our facility and our methodology, we raise money, and care for the birds…but sooner or later we have to plan for later…that’s where an endowment or something like it becomes necessary. After the founder, it’s hard to find someone who has all the needed skills, and will run the operation without pay…so we have to get ready to pay someone who has those skills.

Emily: You have a great setup that allows a portion of your birds to live essentially cage free. Can you tell readers how this is accomplished?

Mike: Having birds out is mostly just having the right space. You have to be able to construct play areas that birds won’t climb off of, and in a room where if they DO get off, they can’t destroy the world. You have to identify which birds will stay put, and which won’t be dangerous to themselves, other birds, or people. Some of ours are out 24/7; some are out all day, some only when I’m in the building, and some only when I can stay put and watch them. A lot of it’s just knowing the birds as individuals.

Mike Hutchison of Iowa Parrot Rescue can be reached at: 563-506-5479 | www.iowaparrotrescue.org