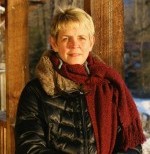 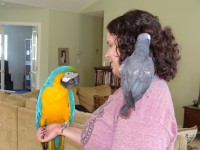 About The Roaming Parrot Project

The Roaming Parrot project began as a road trip by two friends. It was Emily’s desire that during this time she could visit several parrot rescues and parrot adoption organizations. As she thought about her trip, she began to realize she could take her vacation and put it to use for the benefit of the parrots about which she has been so passionate.

As the concept gained a following, the more it changed and grew into a larger project than she envisioned. People became interested in supporting the project and various rescues invited her to visit. Sadly some individuals misinterpreted her motives and questioned whether or not she had the right to visit these organizations. Originally her hope was to develop some kind of rating system by which donors and potential adopters could pick rescues they felt comfortable supporting. Emily quickly realized it would be better for others decide how they felt based on the information she could gather.

It seemed that Emily’s summer vacation with her friend Jessi disappeared. Instead a door had opened initiating a project that could provide support within the avian community. A lack of any one source to locate rescues and information has caused word of mouth to become the standard for decision-making. Misinterpretation resulted in infighting based on “who said this” or “this is what I’ve heard”, rather than a standardized listing of resources and contacts. Accordingly, new parrot people were led away from valuable resources and people because of the infighting. Those who had originally sought to educate were now running off those they had planned to help.

Seeing a need for use of data in a thousand other ways, she and her “support staff” Janet Holt Hilton and Janet Bray, sought to create a more formal procedure and questionnaire that would allow the same, factual data to be gathered from each visit. The need for funding for the newly altruistic venture became apparent when the idea to create a documentary from her visits and interviews was put forth. Seeing a wonderful opportunity for awareness and publicity not only for individual rescues but the industry and aviculture, the idea expanded again. When the suspicious questions began, the three women were a little surprised that what had started out as an innocent vacation could be interpreted as something divisive or judgmental. People began to ask if they could join Emily and Jessi on their trip, and wondered what “authority” they had to go on it. Rumors flew and grew out of control. Fortunately, the majority of the people who heard of the project understood the motives and saw the need for the project’s end goals, and Emily and the Janets decided to press forward and focus on the positive.

Uses for the information gathered began to occur to the trio as they discussed the questionnaire. They realized this information could be used to help place parrots in overflow situations, to give a foundation to those seeking to lobby on behalf of aviculture and parrot interests, to allow prospective adopters to search for a rescue from which to adopt, and to make it easier for businesses and other organizations to find rescues to work with and support.
It became critical to formulate the questions in such a way that they could not be influenced by bias, and could be easily searched and queried for use in numerous ways. They discussed the questions with various rescue operations to find the most relevant information, and added photographs and video as other forms of information to help provide as complete a picture as possible.

As the ideas flowed, they realized this could be quite a boon for rescue fundraising efforts as well. Rescues not equipped for publicity could use their visits to help drive donors and potential adopters to their doors, placing more parrots in better homes than ever before. The documentary idea provided a method for the general public to gain an understanding of the plight of parrots and rescues.

The trip became the first of an envisioned ongoing travel venture, with hopes to make a second and possibly a third trip around the country in the coming years to visit groups missed during the first visit. They could see the potential for future trips to visit foster-only organizations, breeders, and other parrot-related organizations.

The Roaming Parrot is still evolving today, and it is their fervent hopes that it continues to evolve well into the future, providing a current data set that represents an ever-larger segment of the homeless parrot population. As it is on an invitation-only basis, no rescues will be visited against their will, and rescues that do not wish to take part will not be included. Those who do will become a part of something larger than they, and ultimately be represented by those providing best possible care and adoption options for the parrots in their care.