A Thread From The Past

It never ceases to amaze me the things that can come from people who share a common bond. During this trip we have received so much help and support from a myriad of people who share my passion for parrots. Not only have bird people cheered for us from the sidelines, they’ve filled our gas tank, treated us to lunch, given us a place to stay and a bed to sleep in. More then that, they have given us goodwill and friendship – powerful ties that I carry carefully out into the avian world and gratefully extend to other people. 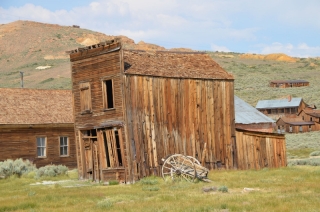 During our travels, as you know, we have made ‘non bird’ stops along the way. One stop in particular is a ghost town in California called Bodie. Bodie was a booming mining town in the late 1800’s and dwindled away to nothing in the early 1900’s when the gold rush dried up. Once home to a couple hundred people, Bodie is now a state park and sits vacant. The amazing thing that sets this old town apart from other ghost towns is how preserved it is. Unlike other towns where you can go and are lucky to see maybe a few original buildings still standing, Bodie boasts of about 100 original structures still standing – and remnants of the townspeople have been left behind. Liquor bottles line the bar inside of the popular saloon; a hat sits on a chair in the living room of a house. A single place setting remains on the kitchen table, inside a kitchen where pots and pans sit in the sink waiting to be serviced. 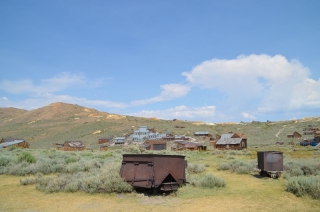 No one knows why the former citizens of Bodie left a large majority of their belongings behind. It is literally as if the entire town simply stopped what they were doing and left one day leaving their former lives behind. As haunting as this sounds, it is even more chilling to walk around the town and peer inside of the windows to catch glimpses of lives left behind. In the hardware store we spotted a calendar turned to June, 1934. Inside the church, the organ sits silently at the head of the building behind the preachers’ pulpit. Peer into the windows of the school to see writing on the chalkboards, an ancient globe, and textbooks open to the last lesson.

Jessi and I spent nearly 3 hours walking around this ghost town and speaking in whispered tones, wondering about the lives of the former residents that used to live here. It wasn’t until I looked into the window of one particular house that it really hit me – these people did exist, and they lived and worked on the same soil I was walking on. I had stepped up to the front door of a house and was peering in one window, while Jessi looked into the other. Looking into the window my heart dropped in my chest – it looked like a normal family living room. A wood burning stove, a stuffed couch, a sewing machine tucked into the corner – and there, sitting next to what used to be a vanity – was a bird cage. A small, old, rusted out bird cage hanging from a stand, much like the ones that pet stores still carry today. I wondered what type of bird this family kept – a canary, for the mines? A pet budgie, or perhaps a dove? Did they have children that delighted in the songs of the bird, or perhaps was it a newly married couple – the wife longing for companionship while her husband worked? What kind of fate is it that me, on a cross country bird filled road trip would stumble across an abandoned cabin 80 miles in the middle of nowhere and find a link to a bird owner from 100 years ago.

It really made me pause and appreciate my journey even more. Someone from 100 years ago carried with them a love of birds – perhaps they passed it down to their children, who passed it to their children. This mutual love, the sharing of a common bond, was passed from generation to generation, and has been spinning wildly across the nation, and has in some way contributed to my passion for birds today. I wouldn’t be on this journey if I didn’t have that passion – that fire – within me. If generations before me ceased to keep birds, ceased caring for their feathered companions, and didn’t move forward in a quest for more knowledge, bird ownership as we know it today would be vastly different. 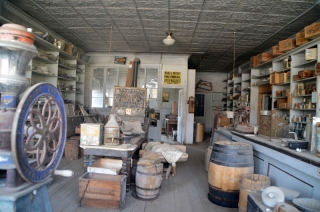 I share a bond with this unknown bird owner from the past – and it is a bond that stands the test of time. This shared interest burns brightly in the faces of the new people I meet and is carried forward to the next generation of aviculture. I hope that we can all step back and reflect on where we as bird owners have come from, where we have been, and where we are going in the future. Remember that single bird cage, and pass on that shining thread of knowledge into the future – carry it like a beacon and present it proudly when you meet other avian enthusiasts.