The Roaming Parrot at AAV 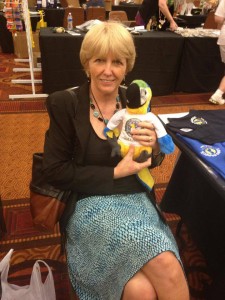 The Association of Avian Veterinarians invited me to speak at their 2013 conference this August, after hearing about The Roaming Parrot and what we are trying to accomplish. Being able to present anywhere is a gift, and being asked to give a presentation to a group of professional avian veterinarians was an honor. So about a week after I arrived home back from the first Roaming Parrot trip, I hopped a plane to Jacksonville, Florida.

I am very serious about the future of The Roaming Parrot, and I consider any opportunity to get the word out there a great blessing. I was extremely nervous when I checked into the hotel and spent the night perfecting my presentation. I woke up extremely early the next morning to load up on caffeine and went to check into the convention. The first thing I saw getting off the elevator and headed to the registration booth was a group of teenage girls wandering around, with Justin Bieber’s face plastered on their fronts. What on earth? Word through the grapevine travels quickly and I learned that the famous pop star was performing in the city that night, and was staying at this very hotel. Wonderful. Not only did I have to present myself and this project to a convention full of people I didn’t know, but I had to push through throngs of ‘Beliebers’ as well. Thankfully, the fans dissipated once they realized Justin Bieber was not hanging around a bunch of avian vets.

My presentation was at 10:45, and by 9 am I was shaking. I attended a few other the other lectures, and then willed my nerves to calm down so I could climb the stage and talk without trembling. 10 minutes before I was supposed to present, my laptop died – gasp. Thankfully the sound crew that was recording the convention let me hook up a flash drive to their macbook and all was well.

As I climbed up on the stage, I decided that I should try to find someone in the crowd that I knew, and pretend I was talking to them about the trip. Better then picturing the audience naked, because I couldn’t burst into awkward laughter that way. As I started talking and forced myself to be comfortable with the microphone and the clicker, I was scanning the crowd for anyone that I might know. Looking around, the first person I saw was my very own avian vet, who I had no idea would be here. GULP.

I quickly looked around again, trying to find someone else that I could comfortably talk at, and noticed someone familiar looking towards the back. Who was that? I think.. is that… no, it can’t be. It was Ted Lafeber, of Lafeber Company. That threw me for a loop and I started to lose my train of thought as I continued, more desperately now, looking for someone I knew. My knees were trembling a bit, and then in the back I saw someone else – Barbara Heidenreich. I quickly stuttered to a stop, took a deep breathe, regrouped and started my sentence over again. After that I zeroed in on my slideshow. 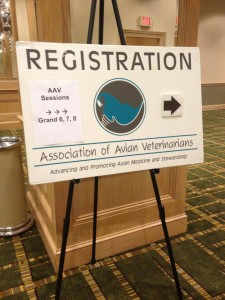 After running through an outline of The Roaming Parrot mission and goals, I showed a few photographic examples of some facilities visited. I followed that with data gathered on the trip that would be of relevance to avian veterinarians, and then wrapped up with explaining long term goals and how TRP will continue on. During one part of my speech when I talked about networking and  building bridges instead of burning them, one person towards the front enthusiastically started clapping. I can’t tell you what a relief that was to have some immediate and positive feedback.

Once I finished my presentation, I was able to talk with Ted, Barbara, my vet, and many more people who were interested and enthusiastic about what The Roaming Parrot Project is aiming to accomplish. I got some fantastic feedback from people who attended my presentation (including Dr. Lafeber and Barbara) and were wanting to learn more, and get involved. I made some fantastic contacts and connections that I hope to use in building the future of The Roaming Parrot.

The convention ended and I flew back where I immediately turned around to go to the American Federation of Aviculture’s Annual Convention in Raleigh. That’s another post, however. Now that both of these conventions are done and I have some time to sit down and really take care of business without having to squeeze work in-between travel, expect a lot more coming from The Roaming Parrot!