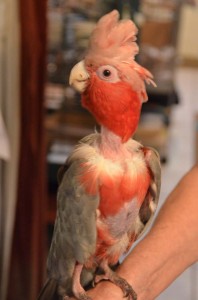 When we tour facilities and gather data, I am able to get a lot of fascinating information from the facility owner that may not make it into the database, simply because of the nature of the data we are collecting. I want to allow readers and fans to follow our experience and get some more personal information about each facility, so we will be conducting short interviews with each facility we visit. I hope this will give you better insight to each facility.

Emily: Can you tell us the background story of how The Lily Sanctuary came to be?

Venette: Over 20 years ago my husband talked me into visiting a bird store where he had been spending time after work.  All the huge birds scared me to death, but he led me through the welcoming party to an area in the back that had baby macaws and cockatoos.  I didn’t even know the difference between a macaw and a cockatoo, I just knew they were so ugly they were adorable..
He said he REALLY wanted to get one and  had already chosen one of the macaws.  We visited often and I seemed to spend more time with the little white one (umbrella cockatoo).  So he bought it for me.  We named them Lucy and Lily.

One day we got a devastating phone call from the vet who came around the store regularly to check all the birds–Lily tested positive for PBFD (psittacine beak and feather disease) and she had to be put down.  He agreed to retest and wait a week;  we took a crash course in tube feeding babies and took her home for the best week of her life.  When the week passed, what to do?. We weren’t going to return her to be killed and pick out another bird.The vet stepped in and told us that if we wanted to try, he would work with us with medicine (experimental  Interferon) and he was wonderful.  Never charged us a dime.  He, like us, wanted to see Lily make it.

We were the typical couple that we would NEVER adopt to now. (unless they were willing to educate themselves, read, and attend a class)  We didn’t know anything about birds.  My husband knew a little, but basically we were utterly stupid.  The bird store did not supply any information.  So of course we did a lot of things wrong, but fortunately over the years our love for parrots created a thirst for knowledge of these wonderful creatures and we became pretty good with them.  Apparently the word was getting out and the parrots were coming in.  We were forced to move out and landed in Orange County.  More space, more birds.

Our intention was never to hoard, but that is how it appeared.  We were providing medical care and working with birds that were formerly considered monsters; we were a complete rehab center with only the two of us!  That’s when the idea came that if we formed a non-profit we could hook up with the best of the best bird people and use our collective knowledge and talents to help these precious birds.  The name was a no-brainer.  Lily was a miracle and we wanted to honor her and share the miracles, which we have.  From an expected life span of one week, Lily was with us for 21 Years.

Emily: You run your rescue from your personal residence = can you tell the readers the challenges that come with a home based facility?

Venette:  “Challenge” is the perfect word. After 11 years of being a recognized non-profit and able to have volunteers, our house has basically not been ours. It’s an open-door circus. We not only have volunteers in and out, but prospective volunteers touring, prospective adopters meeting with our Adoption Coordinator and others further along in the program coming back to visit with their intended adoptee; birds coming in, birds going out… The lack of privacy is the first thing to go, and that’s a tough one. Things don’t get put away where they should be, or just don’t get put away. We basically have no control over our household. Occasionally we have volunteer BBQ’s outside which allow the Monday volunteers to meet the Saturday vols,, etc. and everyone gets to play with birds. That, however, is the sum and substance of our social life at home. We cannot entertain, birds are in every room and they scream when we have company. We gave up the dining room table for more cages so there isn’t any place to either serve or eat. Our families just don’t come over, they can’t take the noise, so our lives are intertwined with our own kind: Bird People.

Of course we are with the birds 24/7 so we are aware and responsible for anything that happens when volunteers aren’t here. Covering, uncovering, many a disaster either averted or resulting in a 3:00 am trip to the 24 hour emergency, trying to lip-read the actors on tv programs.

Emily: One of the birds that I met during the tour, Tito, has passed away. I know he was one of your long term residents – an you tell us more about Tito and his legacy?

Venette: Tito was a special needs nanday conure. He was missing the tips of most of his toes (primarily from close encounters with another bird) and his lower mandible (beak) had been torn away by his buddy, a blue front amazon parrot. His owner had passed away and her husband could not continue caring for the birds (no wonder, there was also a moluccan involved) so they came to us. Tito was a sweet, messed up looking little boy whose lower beak had grown out as a lethal scissorish thing and he loved to pull himself up and fluff as though he was a gorilla and chomp your finger. It didn’t hurt a bit so we told him he was huge and awesome and then kiss his head. He was adopted out twice, both times to people who specifically signed on for a special needs bird and he was returned both times. It was nothing he did, parront life issues..

In the last couple of years he hooked up with a female nanday we named Zipper. She looked like she’d been run over by a lawnmower and rightly so—she was found in the wheelwell of a car and brought to us. Zipper fell in love with Tito and his life was never again his own. She was bossy, needy, co-dependent and the worst kind of overprotective. We let them play together outdoors in one aviary where she only had a few hours to preen him to baldness. Indoors we partitioned the cage to save his sanity.

He passed away suddenly as he was about to be groomed. Grooming (in-house) was not something that normally stressed him, his little heart just gave out. My personal opinion is that he seriously needed space from Zipper. He passed in my hands with love and kisses, and our two volunteers who were grooming also got to send him off with love. We had him about 15 years and he was approximately 10 when we got him. He was so dear. Zipper was devastated to thepoint of manic sessions that were pathetic. Another volunteer with a small bird took him home and he immediately transferred his needs. He is happy.

I’m sad to report that since your visit, within a few weeks of Tito’s death, we lost our beautiful calico macaw, Ms. Bogie. She was loved far and wide, from fans all over the world. Ms. B. went to all our events and was the star whenever we did photos of people with our birds. She was stunning and sweet as she was beautiful. It was a complete shock, within 2 hours after coming inside from hanging out in her outdoor aviary she was gone. She was very young, early twenties.

The necropsy revealed athersclerosis, which could have been going on for years and macaw pulmonary issues. That one really surprised us, we felt she was in the most optimum area of the macaw room, maximum fresh air circulation. She is dearly missed and will always be.

I know you met Roger, our sanctuary cat. An orange tabby—all Watch Cats with bizarre personalities are orange tabbies—Roger knew everyone in the neighborhood and met everyone who entered the sanctuary. Even if they only went as far as the front lawn, he was on their chest grinning like a Cheshire cat before they even got to meet a bird. We lost Roger too. It wasn’t a surprise, but the sadness is just as deep. He had multiple health issues that we treated but it only
works for so long. His bi-polar issues we just had to live with but it was part of his charm.Obviously having a large number of animals increases the chances, the frequency, of enduring the pain of loss. But we have to remember what they brought to us, not the void left behind.

Emily: If you could tell our readers one thing about bird ownership, what would it be?

Venette: Ask a bird owner that question and 99.9% of them will say, “Don’t get a bird”. It isn’t because they don’t love their bird, but because a bird owner has to almost pledge their life away. Willingly. I’m going to skip the myriad reasons because I’m sure you’re covering it over and over (if not, let me know, I’ll write a new blurb…).  But “don’t get one”? Pretty harsh. Sharing one’s life with a companion bird is the most astonishingly fulfilling thing I can imagine. I love all animals—adore, even—but birds? OMG, I think about one or two or 10 of our birds and my heart melts. They are amazing. So here is my nugget: “It is an honor to be chosen by a bird.”